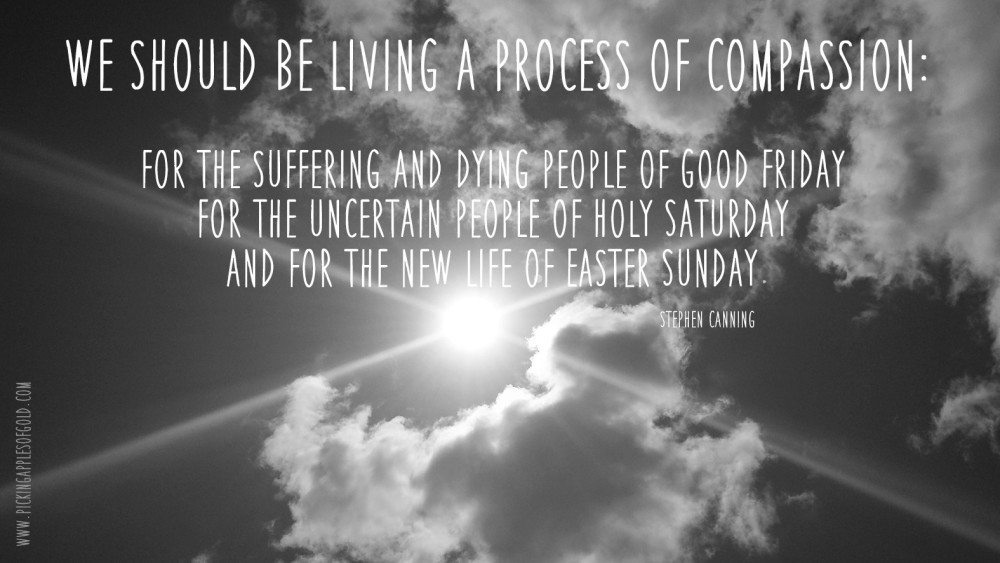 So as I head off for surgery this week here is the first of the promised guest posts looking at pain and suffering. Our first post is from Stephen Canning who asks some pertinent questions about how we deal with death…

Death and Resurrection
As a nurse I have been privileged to be with patients at the end of life. Giving compassionate care to both patient and family. No amount of training can prepare you fully for such an event. The reality of loss and the feeling of failure I experienced when patients passed on almost made me turn my back on nursing. It was only on reflection that I came to understand the importance of process rather than outcome. However good my care delivery was and however much I did everything right, some patients would not get better and go home. The reality is that some people will deteriorate and ultimately die, even with the best intervention. Rather than focus on what I still see as bad outcomes, I am able to value the process of quality care delivery which gives dignity and quality of life, even at the end of life.
Does this idea of ‘process’ rather than outcome help us as Christians?
Do we feel unable to talk about death? Does our fear of upset, for ourselves and others, silence us? As a community of faith are we creating safe enough spaces for people to be liberated by having their voice heard? The alternative is to allow people to live under an oppressed silence. Are we in the business of setting captives free? Opening a dialogue about death and dying can be both difficult and damaging. Having the correct support for both those speaking and those listening is essential. This may well be the reason that we do not talk about death and dying. Will we be brave enough to come out of our comfort zones to pray, prepare and deliver safe enough spaces?
Out of our comfort zone is where the Kingdom happens.
Does the church suffer from promoting resurrection without a real understanding of death and dying? After all Jesus would not have been able to rise again without having first died. Do we keep structures and cultures alive within the church instead of allowing them to die with dignity? If so are we actively preventing new life? Are we keeping institutions alive for the sake of the institution instead of asking questions about how we bring the Kingdom to our ever changing contexts? Let’s face it, we don’t like change. Certainly not in the church. People complain of course about the slow rate of change in the church. People complain and are met with such apathy that they fall into line, grumbling.

Are we sleep walking the church to an undignified death without
the hope of new life?

Jesus loved the world, he had a real love for humanity – a love that transcended death, even death on a cross. As Christians, we too should be Christ’s love for humanity, the hands and feet of compassion for all people. We should be living a process of compassion for the suffering and dying people of Good Friday, for the uncertain people of Holy Saturday and for the new life of Easter Sunday.
We need also to remember the grieving and lament for the family and loved ones at a time of loss. Christianity has a language of suffering that can be useful in articulating grief. Bringing compassion into this uncomfortable time can help the grieving process. Understanding that our theologies fall down and no longer provide the answers should allow us to walk with the broken while they are angry with God.
Death is a reality of life that the church needs to explore and make safe enough spaces for people to explore. This should be done with a Christ like love for people who maybe hurting and suffering loss. A love for humanity that we hope will transcend our human inadequacies.
Bio

My name is Stephen I am 35 years old and a qualified nurse. I am married to an Anglican ordinand so am a vicars wife (husband) in training.
For previous posts on pain, see here for links.
deathdyinggriefGuest postStephen Canning
2 Comments
By Jules