From Ritual to Reality…

I have just finished reading a book called ‘Godzone’ by Mike Ridell. It was recommended to me by a lovely Vicar I met a few weeks ago and it is quite unlike any Christian book I have read before. It doesn’t seem to be coming from any kind of ‘labelled’ perspective, it is just about one mans reflections on what he has learned on his journey through the ‘God-zone’. It is just crammed full of things that make you stop and think. And it is funny. unusual for a Christian book 😉 One of my favourite lines has to be:

God has the patience of a donkey on tranquilisers..

(Which is good news for those who us who are a bit slow in the listening to God department.. )

Anyway the book addresses several key issues – the old faves like: suffering, justice, evil etc, in simple yet powerful ways. One that really struck me is what he says about the way we chose to worship. Obviously this is a bug bear of mine (!) but it particularly struck me whilst reading the debate over at Lesleys  blog relating to homosexuality. In the post and comments several people have made the point that change is necessary, that the church has moved positions on various issues over the years and we need to continue to do so.

Personally I feel exactly the same way about how we approach worship in our churches. Like the debate above and others, there are two sides to the argument and there will be a large portion of people who like/want the traditional approach because that is what they are used to. BUT at the same time we have to recognise that the church needs to move forward, if we want to encourage people in – to meet with Jesus – then we need to help them to do that and for many the ritual and liturgy is a massive turn off. They don’t undertsand it, it is dated and it is a deterrent.

Mike Ridell says:
…It is this need for the wayfarers to gather that brought churches into existence. ‘Church’ at one time meant a gathering of people. Now it means a building with a steeple. ‘Worship’ at one time meant the act of celebrating Gods presence, now it means a collection of rituals at 11am on a Sunday morning. ‘Faith’ at one time was a red-blooded response to the stirring of the Spirit. Now it is a set of beliefs so insignificant that they can be contained in the doctrines. The Way has become religion, it’s meaning drowned in a sea of ceremony…

This morning I had some girls over for a coffee and questions session, it’s a new thing I have just started and the idea being that they can have an open and unthreatening place to ask questions about all things faith/God etc. It went very well and more sessions have been planned, but I was surprised by the level of antipathy to the church. They were keen to talk about God but all of the church stuff was negative. I guess I expected this, but I was surprised at how strongly they felt. And how sad is it, to actually hear a personal testimony that ‘the church’ is unwelcoming, unfriendly, unintelligible. We talk about it all the time and the stats show it but to hear it in my own kitchen made me so cross on their behalf! When will The Church wake up? We are representing Christ on earth. yes, none of us are perfect and we make mistakes but it doesn’t stop us trying to be like Him. It doesn’t stop us trying to show compassion to those around us, and it doesn’t stop us trying to get out there, into the ‘real’ world and helping people who have no faith or little understanding, to take a step towards Jesus. Does it? Is it really so hard? Are we really so arrogant that we continue on in our own little ways saying ‘this is how we do it’ or ‘this is how we have always done it’…

We cannot expect people to come into our churches if we do not make them welcoming, relevant and loving. And I’m not just talking about the coffee (although decent coffee helps..)

I chose the title of this post from a series of talks they are doing at my local church, which looks quite interestng actually, I am not dissing that, but I think the title is just so hypocritical. If they want to make the ritual ‘real’ then make it relevant!

Ministerial training in the Church of England: A Round Up 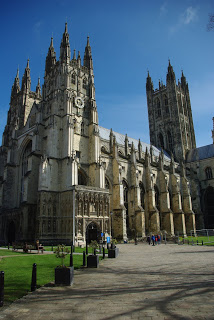 taking it all for granted