As regular readers will know I’m a big journaling fan, so I was excited when the lovely peeps at SPCK sent me 4, yes 4, copies of this lovely new journal to give away! Want to be in it to win one? Then read on…

If you love journalling but are a bit bored of blank pages; or you’ve had a secular journal but need something to help you draw closer to Jesus; or maybe you just want to try something new, then this journal is for you!

When I asked author Carol Petley if she had written books previously she guffawed with laughter; ‘no Jules!’ she said. Then she told me how she had searched for a Christian journal that would challenge her, get her thinking and help her grow closer to Jesus but couldn’t find one. Instead God sent her on a journey to produce one herself, surprising her every step of the way.

Carol first had the idea after buying a secular Q&A journal for her daughter-in-law a few years ago. She liked it so much she bought one for herself too, so they had something to talk about together. But it turned out that the journal was going to be so much more than a talking point as she found that, as the years went on, it really spoke to her about her life as she reflected on each year gone before.

This inspired Carol to think about writing a Christian Q&A journal. As she notes, what better way to end each day than thinking about your relationship with Jesus? And each day the journal helps you to do just that, with a short scripture to read and a question to get you thinking. From life questions like ‘what major task have you accomplished recently’ to the more overt ‘how are you trying to draw near to Jesus?’ there are great prompts for each day and, because the journal covers 5 years, you can go back and reflect on the year(s) gone before too.

God’s journey to production was full of surprises: Carol helps runs an organisation called Waggy Tails that uses dogs to help teenagers with learning disabilities (do look it up, it is completely fab!) and when she first met with SPCK they had assumed that was what she wanted to write about. Carol felt she was there under false pretences! But God had a plan and her idea passed all the approval stages, even with SPCK admitting they had not published anything like this before. And it seems like God’s plan for the journal is already playing out. Carol told me how she took a pre-release copy of the journal along to a group of friends who are not Christians and she saw how it was a great conversation starter, as they were keen to look up special dates like birthdays and ended up having the most evangelistic conversation she’s ever had with them!

So that’s where the give away comes in. We have 4 copies of this beautiful book to give away, so to enter, we’d love to hear who you would choose to give this journal to if you won a copy and why? You can send your answers by commenting below or via the blog Facebook page here.

The Q&A bible verse 5 year journal is published by SPCK and released on 16th November, priced £14.99 and is available from Eden and Amazon (at, it has to be said, varying prices!)

To enter the giveaway you must suggest someone you would like to give a copy of the journal to and why. Entries will only be received via comments to this post or the relevant post on my blog Facebook page.

You may enter as many times as you like.

Entries must be received by 11.59pm, Saturday 18th November 2017, any entries after this point will not be included.

The 4 winners will be decided by Jules and Carol and notified via social media by Wednesday 22nd November. Winners will need to provide a postal address to where the prize can be sent. They will be sent out within 3 days of receiving this information.

Family members of Jules and Carol may not enter this giveaway 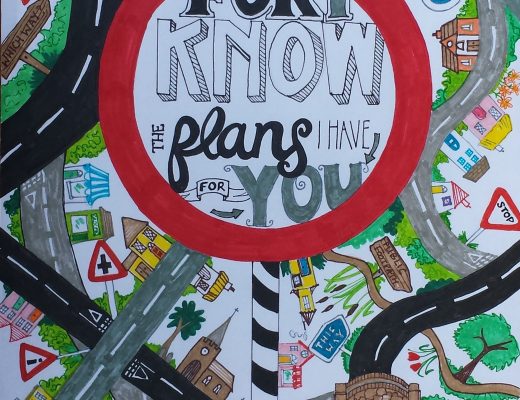 For I know the plans I have for you // Colouring Sheet