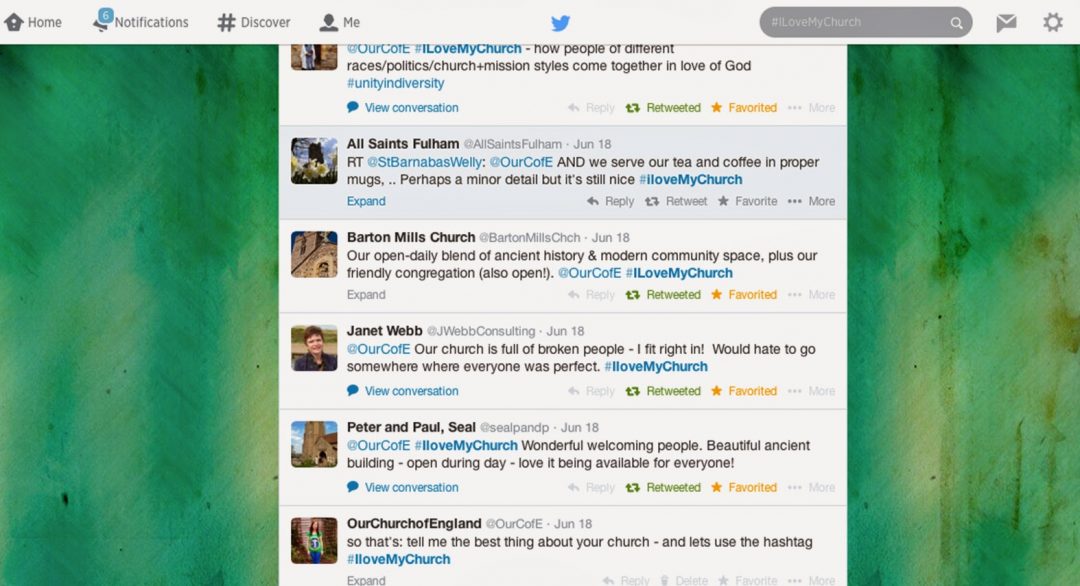 A few weeks ago I got to take part in the @OurCofE Twitter project which is currently running. I’ve got to say I think the comms office at Church House have excelled themselves with this one. What a fantastic idea, bang up to date, great way to interact with people and ‘such fun’ !
@OurCofE is basically a year long project, running on Twitter to ‘tell the story of the Church of England through the eyes of its people, providing a daily insight into modern faith in action’. A different person from within the Church of England tweets about their own life and experiences within the church each week. So far it has included a Bishop, Vicars, Curates, people overseeing churches and a school chaplain to name just a few.
The CofE PR says this:

‘Followers will be able to peek behind the curtain of church life and see behind the scenes as they get a feel for daily life in parishes.  In addition to daily life there will be a glimpse of the inevitable unusual and unexpected events that come with being part of the Church of England.  Through it all the account will seek to show through thousands of tweets how God is at work in His Church each day.’

So, when I heard about this idea back in March I applied straight away, a twitter addict and a lover of the CofE I was keen to be involved. Getting to tweet about God and the church – some of my favourite things – how much more awesome than that can it get!? So then I was super excited to get chosen to take part.
My input was really on 2 main levels,
1)     as a member of staff at a Fresh Expression Church based in Mid Sussex and
2)     As an ordinand studying at SEITE.
and it was great to be able to give a perspective on both.
As the week approached I have to admit to being both nervous and excited. I had been following the account from the beginning when it started with the fabulous Kate Bottley (The vicar from Gogglebox in case you didn’t know) and there have been some fantastic tweeters so far, giving a really broad view of the work and life of the Church of England. So it was no small task to follow the amazing tweeters that had gone before. And of course there was the added thought that I would be representing the CofE too – someone said to me – ‘ohh you’re the face of the church this week’ – so, no pressure there then!
All that said it was such a great experience and a real privilege to be part of it. I have to say I have never tweeted so much in my entire life (my husband might disagree with that one…!) I was quite taken aback on the first morning to suddenly have so many retweets, favourites and replies! What a great bunch of people the followers are, I really felt like I had suddenly been embraced by an amazing community, with so many people interested in what I was saying and wanting to know more.
One thing I really loved was that each morning I do Morning Prayer (see I’m almost a proper Anglican) and so I offered to pray for people each day and quite a few responded. I always think it’s a completely privilege to pray for others and this was no different. It really did give a sense of community that people felt able to ask for prayer. Those who say social media doesn’t provide a real community are often wrong… As I’ve said the interaction on the account was great, so I really wanted to highlight that during my time tweeting there. On day 3 I think, I was banging on about how much I love my church so I thought I’d ask others what they loved about their churches using the hashtag #IloveMyChurch  Well, what a great response, people really got hold of it! One thing that was really lovely was many people saying how welcomed they felt in their churches despite being broken or having difficult issues. That is what the church is all about – loving EVERYONE! and it was so great to have an opportunity to show that. Another great one was asking people to say who their #ChristianHero was – had some great responses to that too, from someones primary school teacher, to well known legends of the faith and just ordinary, everyday people. Have to say I may have been inadvertently slightly more controversial than intended. On the first morning, after innocently mentioning the book of Job, a whole Twitter discussion opened up about suffering and whether God deliberately allows stuff to happen. I so wasn’t ready for that! Then there was the debate about whether one should refer to Theological College as #VicarSchool – don’t even get me started on that one… That said one of the things I love about Twitter is the chance to chat and debate things with others, and it was no different on the @OurCofE account, except just slightly more frenetic!
Something I feel passionate about is helping people to see the heart of the church and the love that flows through it from people full of Jesus. So often I meet people who have a story about how the church has hurt them or let them down and I want to say that’s not everyone and it certainly isn’t every church. The church is full of people who give their time, who welcome strangers in unconditionally, who help the broken to see their lives transformed. I want people to see the communities who are brought together by a building, a person, a welcome. I love that Twitter is a great place to do that. I know not everyone understands how Twitter works, not everyone ‘gets it’ but even those that stand on the fringes get to see a different perspective. You can’t avoid it on Twitter, opinions, ideas, thoughts, they all get thrown around like rice in a liquidiser. It’s all in there! Thing about a lot of social media is you never know who’s there just watching. My husband calls himself a ‘twitter voyeur’, he reads a lot of tweets but doesn’t often tweet himself. He might not choose to interact as much as I do but he is still getting reached by all those grains of rice…
This is from the Church of England Website:
Claire Diaz-Ortiz, Head of Social Innovation at Twitter, said:

“The incredible engagement levels we see on religious tweets the world over prove the power of 140 characters to convey hope, motivation, and inspiration. The @OurCofE Twitter account will build on this by telling the story of the Church of England through the eyes of its people, providing a fascinating insight into modern faith in action. Spanning great cathedrals to tiny parishes, it will provide real-time glimpses into the workings of the church for followers across the world, 140 characters at a time.”

I love that line: ‘…the power of 140 characters to convey hope, motivation, and inspiration’. Imagine if we all used Twitter for that alone, how much more powerful would it be as a medium for change…?
..oo0000oo..
If you are interested and want to find out more you can check out the info here, and my own tweets from the account are here (although not the replies to individual tweets so you can’t see whole conversations, but you can always read back through the tweets on the account if you are that keen!)

Also If I have included one of your tweets in these images and you would rather I didn’t please do let me know. 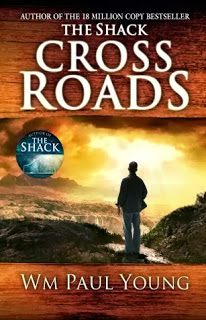