So, This week, Irish TV station RTE, put out a trailer for their Sunday programme ‘The Meaning of Life’, in which Stephen Fry lets loose an angry tirade at God. Pretty good trailer, made me want to watch anyway, although it’s not on until later tonight so I have to admit I haven’t yet seen the whole thing, so my response here is largely based on the 2 min clip posted by RTE on YouTube.

Presenter Gay Byrne asks Fry about what he would say if he approached God, after death, which prompts Fry to respond with, as he says, theodicy, asking God why on earth he allows such terrible evil in the world. And whilst there has been a fair bit of backlash to his comments, let’s face it, it’s a question many of us might like to ask God for ourselves. Let’s not be offended by Fry’s words, as some already are, because the thing is Fry is just venting what many people believe of God today. He is a mean God, who rules with raining fire and fierce judgement, just waiting to catch us out, who delivers us into evil not from it, as Fry says: a capricious, stupid, mean-minded God.

This makes me sad. It really does, because Fry, like many others, has got God so wrong. The God that I know, is a God of love, a God who longs for us to turn to him, to run into his open arms, to hear him pouring out his love for us, to allow him to comfort us when we mourn. He wants to know our every thought, our every plan, the desires of our hearts. The bible tells me this, but not just that, I know it because I have experienced it for myself. And that’s the thing I feel more and more: that we as Christians need to help people to experience God for themselves, truly. It’s all very well encouraging people to read the bible, to come along to a church service or do an Alpha course, but without the experience of meeting God, experiencing him personally, then we run the risk of simply leaving people feeling like Stephen Fry. I don’t know his background but I would not be at all surprised if he had spent time as a child in some sort of religious environment: school chapel, being dragged to church by his parents, that kind of thing. He is an intelligent man, I’m sure he isn’t making these comments without having some basis for them, but like many others he has formed his opinions on God on a half truth, or in fact on a lie. The lie that God is the author of evil, and not of peace and love and truth.

So what do we, as Christians, say to people like Fry? Because I’m pretty sure none of us have the answer to his question – why? It’s a question that has kept theologians and writers in the money for centuries and yet still people ask the same questions – because we cannot answer them. Oh yes we can try, we can come up with all sorts of reasons, but the truth is we don’t really know why this stuff happens. If God is a loving and just God surely he isn’t the one who sends down illness and suffering upon us? but then if he isn’t where does it come from? Oh yes, the Devil, but then that implies God is not sovereign and that he then allows this stuff to happen, but isn’t allowing it as bad as causing it? Oh so he doesn’t allow it, it’s nothing to do with him actually, so he isn’t sovereign then, he can’t stop it? But I thought he created the world from scratch, how can he not be in control….and so on. It’s an argument you can never end. personally I put it in the box marked ‘to do’. One day, I hope, one day I might get the chance to ask God for myself, but in the meantime I don’t allow it to take away from the things I know to be true of God.

So, then what do we say to people like Fry, who think God is an angry, egomaniac? I think, that all we can do is share the love that we know to be the very essence of God. We can tell people how God has impacted our lives, how we know him to be present in the world around us. To show them another truth, the one that lives within our hearts…

Update:
Here are a few more responses to Fry’s interview: 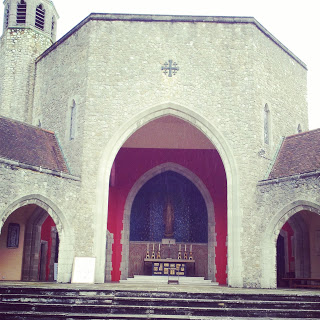