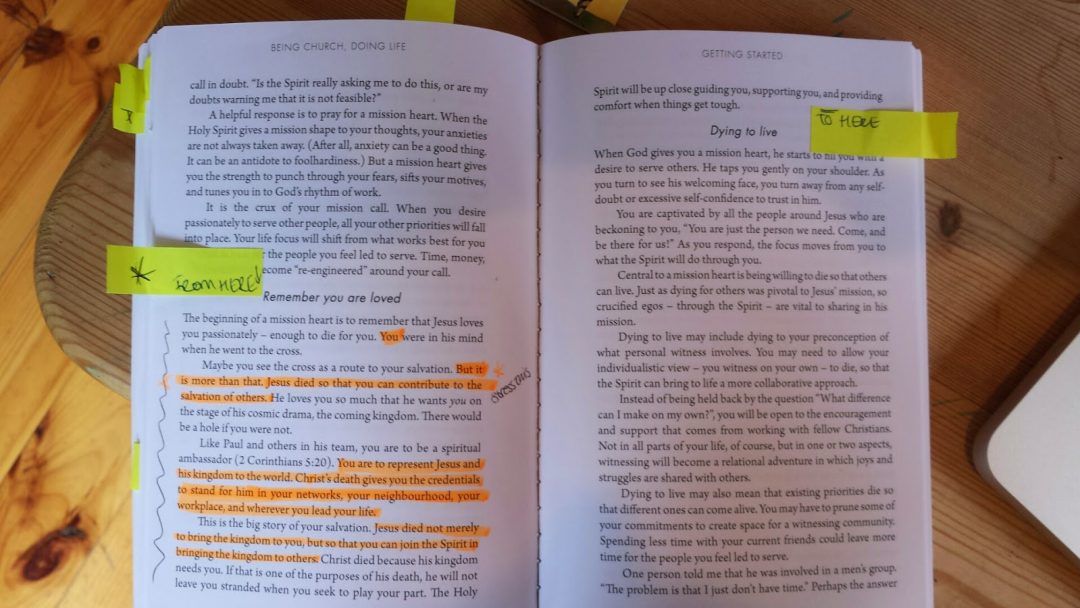 Luke 5:17-26 TNIV
7 One day Jesus was teaching, and
Pharisees and teachers of the law were sitting there. They had come from every
village of Galilee and from Judea and Jerusalem. And the power of the Lord was
with Jesus to heal the sick. 18 Some men came carrying a paralyzed man
on a mat and tried to take him into the house to lay him before Jesus. 19
When they could not find a way to do this because of the crowd, they went up on
the roof and lowered him on his mat through the tiles into the middle of the
crowd, right in front of Jesus. 20 When Jesus saw their faith, he said,
“Friend, your sins are forgiven.” 21 The Pharisees and the
teachers of the law began thinking to themselves, “Who is this fellow who
speaks blasphemy? Who can forgive sins but God alone?” 22 Jesus
knew what they were thinking and asked, “Why are you thinking these things
in your hearts? 23 Which is easier: to say, ‘Your sins are forgiven,’ or
to say, ‘Get up and walk’? 24 But I want you to know that the Son of Man
has authority on earth to forgive sins.” So he said to the paralyzed man,
“I tell you, get up, take your mat and go home.” 25
Immediately he stood up in front of them, took what he had been lying on and
went home praising God. 26 Everyone was amazed and gave praise to God.
They were filled with awe and said, “We have seen remarkable things
today.”
Talk // The Faith of Friends
So we are on our 3rd Summer Sunday
and over the summer we are looking at some of
the parables of Jesus in Luke’s gospel. Last week Will talked about healing
after looking at Jesus healing the man with leprosy. This week we see another
healing, this time of the paralysed man.
So in prep
for this talk, I’ve been reading a book called: Through Peasant Eyes’ by
Kenneth Bailey, which looks at the oral
traditions of story telling in the middle east and particularly in relation
to Luke’s Gospel. Parables and much of the early sharing of the Christian faith
were shared orally by people meeting each other, sharing stories, social time.
In his book
Bailey says of the parables:
‘The parables of Jesus are a concrete/dramatic form of
theological language that presses the listener to respond. They reveal the
nature of the kingdom of God and/or indicate how a child of the kingdom should
act…’
and I was
really struck by this line but just to make it a bit simpler:
We are the children of the kingdom of God right?
So then, when we read the parables of Jesus, they should teach us how to act in
a general sense but also foster in us some sort of response. Some sort of action.
So as I was
looking at this passage, which has so much in it, and thinking on what to talk
about today, I thought ok, well what is it that should be the response here? What is the action that we should take away from
reading this story?
And what
stood out to me and what I want to focus on today, is not in the man who was
healed, ‘Matt’,  but actually it’s the people who carried him. The
people who did something extraordinary for this man, who went way more than the extra mile for him.
Not for themselves but for him, for this one guy, lying paralysed on a mat.
Why? Why
would they do that?
Well I think
it’s simple, the passage tells us that ‘Jesus saw their
faith’.
So. Jesus saw their faith. And that’s why we
asked you to think about how your faith has impacted others. How have others
seen your faith?
I think
these men were lovers of Jesus, early followers and they knew what Jesus was
all about and they wanted some of that for their friend. We don’t actually know
whether the friend wanted it but I guess he didn’t have much choice!
The point
is, they loved Jesus enough and they loved this man enough to be pretty radical
in getting him to meet Jesus.
And that is what I am going to suggest should
be our guide, or our response to this parable. A guide to what our actions
should be as children of the kingdom of God. Do we love Jesus enough to enable
others to meet him? Do we love others enough to be radical in how we help them
to meet him?
Do we?
There’s our
challenge… and it’s a challenge to us as individuals and as a church.
To love Jesus enough and to love others
enough.
Xxxxx
Another book
I’m reading, which I will probably be mentioning a lot in the months to come is
this: ‘Being Church, Doing Life’.
It’s all about people getting outside the church, being missional, meeting
people where they are at. I really recommend it, especially as we start to look
at being a transforming presence in Mid Sussex. Anyway, I just want to read you
a bit from this book: It talks about a mission heart, but don’t freak out at
the term ‘mission’ in this sense, it simply means having a heart for others.
P.152, “Prayed for many in the town, healings are happening here! this town’s ready for revival!”“all my friends were gossiping in the common room at college and I wasn’t joking in but instead reading. This started a conversation about why I wasn’t joining in and showed Jesus!”

“I did a bible reading at school”

“I was walking down the street and a lady and her dog saw me. The dog approached me. The lady was so surprised that she kept asking what is it about you? Well I told her it was Jesus and I was able to pray for her right there”

“By treating anyone who comes into our house as if it was God coming in, we’ve recently had the theory tested when we found a group of half drunk teenagers partying in our house (as guests of our daughter). We didn’t kick off but cooked pizzas and made them all feel welcome”
” loved a friend who was going through a really tough time, ended up sharing Jesus with her and eventually she became a Christian!”
” Aiming to run a business with kingdom values, creating a supernatural workplace environment”
” Telling people at work that I go to church”

Is sharing your faith *actually* counter-productive?