Female? Under 30? Thinking about ordination or church leadership? Here’s 10 things you might need to know…

1. Put on your big girl pants

(she says, with tongue in cheek)

Sorry to say this up front but, look, let’s face it, this path may not be easy. Whilst many more women are taking up leadership positions in the church, the patriarchy (there I said it so we can get it out of the way) still has a big ugly butt at times. So right from the moment you feel called, put on your armour, don’t take any crap and fight your corner.

So, you’re in a diocese where the Bishop won’t ordain women? Then get help or advice from another local leader – or a Bishop in another diocese (not all dioceses are the same).

Member of a conservative evangelical church? Go direct to the DDO or find a friendly vicar/leader in another church to talk things through. Don’t be afraid to do so (see point below on not being afraid!)

Someone tells you that you have to train part-time, only be self supporting, or wait until you have had kids? (yes, really, it happens all the time) then don’t sit back and take it – challenge it (nicely, we don’t need to be bitches), ask why, and look at all the options.

For some men there is nothing they like better than exerting their manly maleness by patting you on the head and saying: there, there you precious delicate little flower, go home bake a cake and stroke some kittens and think about if you really feel called. Yeah ok, so that’s a bit snarky and to be fair it isn’t always the men anyway, I’ve found older women (not all, so don’t jump on me, but some) who have fought hard to get to where they are, and can be unsympathetic to younger women who simply want to, ahem, “have it all”.

Apparently we’re too young, too emotional or too fertile to be any good at ministering to, you know, real people. Thankfully there are also plenty of really wonderful supportive people who might listen to you seriously and advise you well, seek them out and ignore the others (or report them if need be).

God called you. God knows you, so be you. You don’t have to try and be like one of the chaps, or fit into any traditional mould. As a woman perhaps you bring gifts a man wouldn’t?

To be honest there may well be expectations on you and assumptions about you because of your age/ gender/ ‘life experience’ (whatever the flip that means) – is that ok? Not really no, but it is often the case. You might need to fight more than male colleagues do to get the respect you deserve but go and be you and get on with it.

During the discernment process I often felt like there were questions I couldn’t ask, or things that wouldn’t be understood so I didn’t ask them and I know others have felt the same too. It’s understandable, people in authority are making decisions about your future, you don’t want to give them a reason to say no, right?

Just remember that these people are generally there to help get the best for you and for the church, so try not to be afraid. And also remember God is bigger than one dodgy question or one unhelpful advisor.

If you really don’t want to ask your DDO or whoever is your port of call, look out other ministers who you can go to, whether locally or online. I’m always happy to receive DMs and I know many others are too.

5. And now I shall enter Holy Matrimony (but only if the Bishop allows it)

So many people ask if they can get married during training, curacy or ministry life  – YES! Of course you can, the Bishop doesn’t rule your life you know (much as they sometimes may think it…)

Marrying another ordinand or minister?  yeah ok that is slightly trickier in terms of ministry but, yes still yes! That’s probably another blog post, but some dioceses won’t let married couples serve curacy together, in some cases even minister together, so then the Bishop does have a say.

Also, if you hear: “you’ll never find a husband if you become a Vicar” (yawn…) it is:

a) none of their business

b) totally sexist, and

6. Being the best ministry mum ever

Yeah so having kids as a female minister, or even considering them seems to be a bone of contention with many. So much so that I wrote a book about it (out next Feb, watch this space).

Some vocational advisors still use phrases like ‘you are a risk’ to young women seeking ordination because they might just dare to get PG.

So here’s some myths busted:

You CAN train residentially as a young woman, with or without kids (as in there is no overall reason why you can’t, but it is down to each diocese and college)

Maternity leave during training IS possible but tricky and varies on college and diocese. Be aware that if you are about to get ordained and haven’t started work yet, training doesn’t count as work so you will most likely not be eligible for mat pay.

Yes you CAN take Maternity leave during curacy – most dioceses now have policies  but if they don’t seek out someone who’s done it already and share theirs.

It IS perfectly possible to work in ministry and be a parent, there are many of us doing it already.

No one wants a pregnant Vicar? Yeah ok some people won’t like it but many other members of congregations will love it, will adore your offspring, knit you tiny, yet hideous, babygros and cuddle your baby while you administer communion.

7. I’ll have to change my entire wardrobe.

I’ve got to be honest talking about clerical wear for women is not my fave subject, it’s a bit cliched and I’d rather be talking theology, but I know it matters, so here you go:

No you won’t need to change your wardrobe.

Wear what you like! There are female ministers with blue hair, tattoos, piercings, manicured red nails, those who dress in stiletoes, sharp suits, floaty florals, all black, pink, blue yellow and every colour in between. Just wear what you like. Most of the time I just wear the same sort of clothes as before I was ordained but with a dog collar. I bought a dress for doing funerals and sometimes I take my collar shopping to see if it works with a new item but mostly it’s the same.

Again, be you. You’ll feel far more comfortable too.

One of the biggest things I hear is that young women don’t have role models in the church and they can be hard to find, especially when you are starting out. When I was ordained a few years ago there were only two of us with primary age kids and in full time stipendiary positions in my diocese, for example.

But there are people out there, ask advisors, get online  – Facebook has groups for female ordinands, ministers & clergy, & Twitter is fab for networking. Plus there are some great organisations listed at the end of this post who you might find helpful too. I’m also thinking about starting a mentoring scheme so if you’re interested in that let me know.

You know I really dislike that women are so often tarred with the brush of being bitchy and gossipy about each other. Many of the women I know are so supportive of each other and real encouragers so let’s be that kind of woman. Let’s be women who challenge the unfair and the sexist; let’s offer our help and expertise wherever we can; let’s show that women in ministry bring a wealth of experience, and character that makes a difference.

At the end of the day all this is not about us it’s about the one who called us. I hear people say regularly, ‘remember your calling, remember how you felt when you first felt called’ – and cliché though it is, it is true. There will be times for all of us in ministry where we will wonder: ‘what in the merry name of all that is holy am I doing?’. For some of us as women we can feel that all the more keenly, with added pressures upon us, the sexism we face, patriarchal attitudes and lack of support, so just remember always to focus on Jesus. Perhaps it should go without saying but I know I need reminding of that on a regular basis so perhaps you will too.

I’ve put this list together from things I’ve heard people ask, either in person or on social media, and in response to a recent tweet. If you’ve got other questions or thoughts do get in touch and I can add them in.

Now go out there and be pretty darned epic for Jesus…

Check out these for further reading:

The Junia Project – a platform for women and men to advocate for the inclusion of women in leadership in the Christian church and mutuality in marriage.

Young Clergy Women International – a network of ordained women under 40 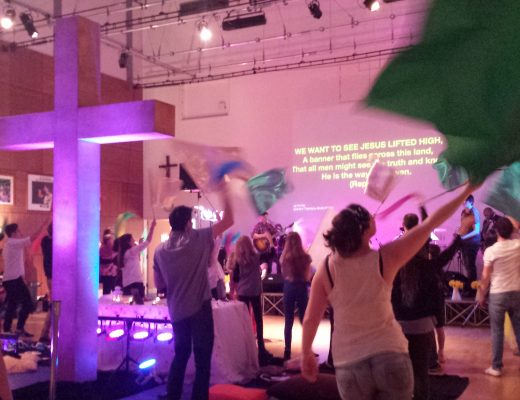 Enough? Parenting during the pandemic