A ‘sort of apology’ to Archbishop Cranmer 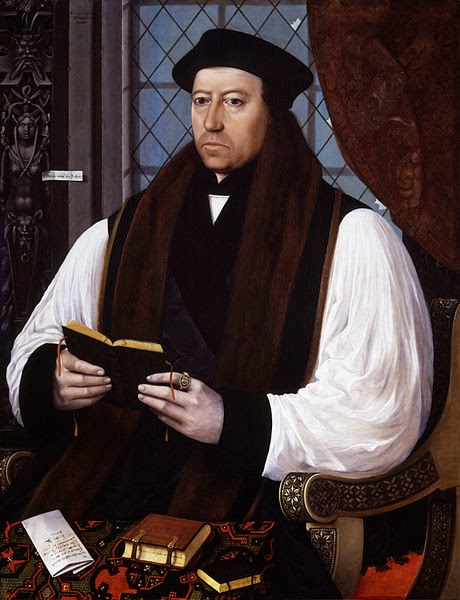 Suitably chastised by my Father about my comments on BCP in my last post (which were, I would like to say, meant tongue in cheek) here is a little tribute to Cranmer, or as my husband just said a ‘big up’ to the Archbishop… (and will also show that I did pay at least some attention in last term’s teaching…)

This is what I said yesterday:

” For the uninitiated, the BCP (Book of Common Prayer) is the most boring, old, out of date book of services that the church still clings on to. (Now, now, those of you about to screech at the screen and send me off a hasty email telling me how wrong I am, I know how you feel already and you don’t need to remind me 😉 ). Needless to say there will be no singing, smiling, talking or whispering during this service. It will include those Psalms with the nonsense 3 second pauses I wrote about previously, and I will not enjoy it. I will also probably need a small miracle to get through it without making a mistake, so if you’re a pray-er then please do!” Right, so the Book of Common Prayer, first published in 1549 by Archbishop Thomas Cranmer, has been referred to as one of the most important books in the English language due to it’s use of language which (along with a few other contemporary texts) helped to shape patterns of speech over the following centuries.

The BCP came out of the Reformation (when the Anglican church split away from Rome), it’s aim was to create a form of liturgy (the prayers and words spoken during a church service) that was accessible to all – hence ‘Common Prayer’. Prior to this, all services were in Latin (from the days of the Roman Empire) and largely read by the Priest to the people – there was little in the way of ‘audience participation’, shall we say.  Popular thought is that King Henry VIII formed the Anglican Church so he could get divorced. This is true, but omits a whole range of things going on prior to this, with English clergy already excited about the Reformation and events happening elsewhere because of it. So really, it was rather a convenient time for Henry to tell Rome to sod off. Thomas Cranmer was Henry’s choice to be Archbishop of Canterbury and head up his new church, and Cranmer immediately set about changing the liturgy into english. Funnily enough Henry wasn’t actually all that keen on this so Cranmer’s book didn’t become law until after Henry had died, with the entire work being published in 1549 for the first time (although bits of were published earlier).

Sadly Cranmer’s new found fame was short lived. You would have thought people might have been grateful to be able to understand the services at last, but of course we are never happy are we? in some areas there were actually full scale riots! Hard to see that happening about the church today (well, maybe not that hard actually…). Anyway, when King Edward died (after just a year on the throne) Queen Mary (a Catholic), lovely woman that she was, had Cranmer burnt at the stake. When she subsequently died, the new Queen – Elizabeth I – brought back the Protestant church and the BCP. It was modified in 1662 but has remained in use ever since. In the later part of the last century it was replaced as the main source of approved liturgy in the CofE, but still remains in use alongside the newer forms.

So, Cranmer, total legend or a bit of a rebel? Well, actually I like him – perhaps because I am a bit of a rebel myself at heart (although I should say he is referred to as peaceable and also not liking disorder). In today’s world we talk a lot about church being accessible to all, and that’s exactly what Cranmer wanted to do. I mean prior to the BCP, it would be the equivalent going to church (even if you only go once in a blue moon) and having the whole service read in Mandarin. Unless you happen to be fluent in Chinese dialects it would be complete nonsense. You might feel some sense of reverence or feel a bit virtuous for having gone to church, but would it have a profound impact on your life? unlikely… Would you bring friends…? oh, yes come to my church, you can sit for an hour and hear all about God, but you won’t actually understand a word… inviting, eh? So, Cranmer aimed for a simple liturgy, where ‘all that is misleading or meaningless is excluded, words are audible, actions are visible and congregational participation is encouraged…’

It was unfortunate that King Edward died when he did, had he lived longer perhaps Cranmer would have been spared the chop and contributed far more to the newly formed Church of England. Either way I feel sure that he would be the first to admit, that his book, written nearly 500 years ago, is perhaps as far from accessible to the masses now, as the Latin liturgy was back then. If he were here now he would probably be heading up the Liturgical Commission bringing in new ideas and thoughts.

So, Cranmer, I am sorry for not revering you and giving you your deserved praise, you were and are a legend and I am grateful for pioneers like you, leading the way forward for this rather old and tired church (that I am also rather fond of). As the book of Hebrews says 12: 1-3 (Message version)

” Do you see what this means—all these pioneers who blazed the way, all these veterans cheering us on? It means we’d better get on with it. Strip down, start running—and never quit! “

Cranmer was a pioneer who blazed the way for the modern church, so he should be an example to us. However, do we just follow what he wrote 500 years ago, or do we continue in his footsteps, taking the church forward? There is still a place for the BCP in our church of course, and yes, as my Dad reminds me it does have some wonderful language within it. And I must admit that I would be the first to say that I love the Church of England because of it’s depth and breadth. There is space for us all within it and if you are a BCP lover, then good for you, I am so glad that through it you can meet with God. But this is just my opinion and I find it a bit dull. Perhaps ‘boring’ was a bit unfair… well, no actually I don’t think that it was, I love God and I truly believe I can worship him anywhere, in any place, so if BCP were all there were I would worship God through it, but it is still IMHO the most boring, old, out of date book of services that the church still clings on to… and that’s no reflection on Cranmer himself, just perhaps on the church (my church) that continues to use it…

This is not an academic piece of writing (*sniggers*) so I won’t be adding footnotes and citations but if like my Dad you are vaguely interested, this is where all this info comes from (and my own head obvs…)

Using the Internet as a Spiritual Practice 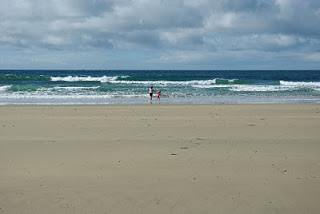