Ezekiel 47 // New life from the heart of worship… 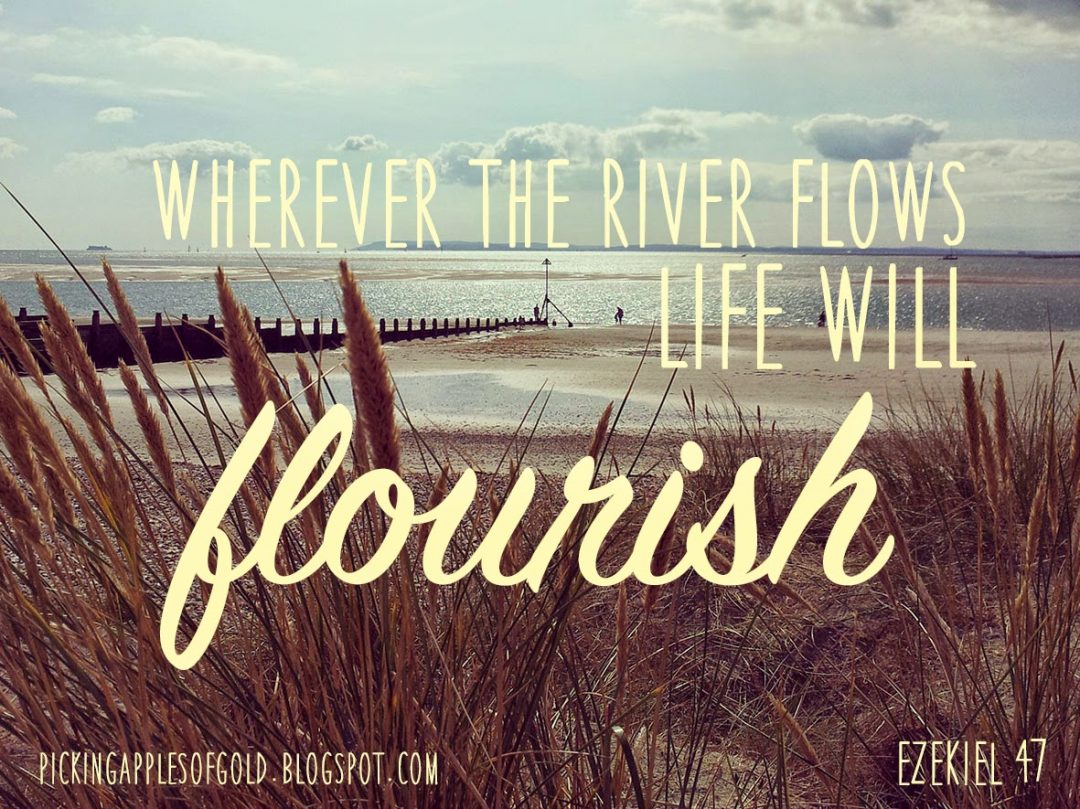 So I’ve been looking at Ezekiel recently in my foray through the OT prophets, and specifically I’ve focused on Ezekiel 47. Partly because this passage has been given as a prophetic
word for our church and has been important to us, but also because I wrote a short talk on it as a piece of coursework for #VicarSchool . So this lengthy post is some thoughts based on that talk…

So what’s Ezekiel all about…?
Well, this was the 6th Century BC, and the ruthless ruler
Nebuchadnezzar was forcibly taking land into his kingdom of Babylon. As part of
this campaign, his armies plundered Jerusalem, carrying off into exile the
king, royal family and significant leaders and people of importance, fighting
men, and all the craftsmen and artisans, about 10,000 people in total (you can
read about this in 2 Kings 14). Ezekiel was at this stage a trainee priest and
he was included in the exiles. Subsequently (10 years later) the city was completely
overthrown, after 18 months of siege, resulting in destruction, famine and
disease. The city was almost completely destroyed and any surviving inhabitants
were carried off into exile to join those who had previously been taken.
In
amongst all this chaos, God called Ezekiel to be a prophet to these people, the
Israelites. Chapter, 47, is actually part of a vision God gave to Ezekiel, which starts in Chapter 40, of the
new temple restored and with God’s presence within.
So,
here we have a people (the Israelites) in despair, dejected, having been through all kinds of
pain and torment and now living in exile. Previously they would have heard
some doom and gloom from Ezekiel but as we progress into the book and his later
visions and prophecies they focus on hope, and renewal, a new and
glowing future, one inhabited by God prophesied for them. This would have given
them something to believe in, to hope for, and would have helped them to focus
back on God.
And
here in Chapter 47, there is almost the ultimate message – not only will the
city and the temple be restored, but life in
abundance will flow into the land. I am reminded here of John 10:10 where
Jesus says: ‘The
thief comes only to steal and kill and destroy. I came that they may have life,
and have it abundantly.’
And
what have the Israelites been through? – everything they had has been
stolen away, people have killed in their thousands, and their homes and city
destroyed but here God is saying to them through Ezekiel, I will give you life and in abundance. It’s the same message from
the Old Testament, later given by Jesus in the New Testament, and it’s also the
same message for us today, that God brings us life in abundance.
So
what can we draw from this passage for ourselves today?
In
fact I think there are a lot of similarities with the Israelites situation and
with our world today, but perhaps in a more spiritual sense. Obviously there are areas of the world where the scene
of post-war destruction and despair are
a daily reality, but for us here in our western world, I think it relates to us
more spiritually. We battle daily
with the evils of this world: of
temptations, of debauchery, of ungodly attitudes and behaviours, all of which
fuel our society and all of which pull as away from God. Our idolatry isn’t
towards the God Baal or Asherah as it was then, our idols are things like
money, fame, sex and status, but the
result is the same – that these things can so easily pull us far from God.  In Chapter 9 we see God saying to Ezekiel:

Go throughout the city of Jerusalem and put a
mark on the foreheads of those who grieve and lament over all the detestable
things that are done in it.

As
a society of course there are faithful Godly individuals today, just as here in
this book, so a question for us is: are we going to be the kind of people who
lament the detestable things going on in our society and if so, how do we do
it?!
I
think it’s simple – we get right with God, we focus on him. That is the key
here and now, just as it was then.

So
the vision is of this new temple, now filled
with God’s glory and as we read on in our passage, we see this stream, this river,
flowing from the temple, directly from
God’s glory, from his presence.  God
enters the temple from the east and here the water flows back out to the
east, increasing as it goes.
This
speaks to me of the importance of our
worship in God’s presence. God’s glory already inhabits the temple, we see
that, but then his life flows from
the temple. So what happens then for God’s presence to be transformed in that
place to then go out in such
abundance? I believe it is through the active worship of the people in the
temple in the presence of God. Exodus 33:14 shows the Lord telling Moses his
presence will go with him, so we know that God’s presence can be carried.
Something happens when we come into God’s presence, something that allows his
glory to increase, to spread and to impact.
And
for us, we don’t worship in God’s presence in the same way, do we? 1
Corinthians 3:16 and 6:19, tells us our bodies are a temple for the Holy
Spirit, who lives within us. So how can we
then enable that abundance of life from God’s presence to go out from us? to
the land, or to the people around us?
I
think it’s both clear and simple: By being in God’s presence, in worship.
Back
then, they went to the temple, but we have that within our very beings. So we
should honour God with out bodies, in worship and prayer, in time in his
presence, and then we can be filled
up – to go out. And what might start as a trickle of water from us can become a
flowing river too deep to stand in. You never know what a small act of kindness
or blessing or a word can do for someone else – something seemingly small God
can grow into a river teeming with life.
Did you know that rivers are particularly significant in the Hebrew scriptures,
usually signifying the bringing of God’s blessing. For example there’s the
river flowing from the Garden of Eden (Genesis 2:10) and in Psalm 46:4 which
talks of: the river ‘whose streams make glad the city of God’ and ‘God is
within her…’  and of course here in
Ezekiel 47 we see the river bringing abundant life wherever it flows, with
trees on either side, (v.7) and (v.9) swarms of living creatures will live
wherever the river flows, waters that were once dead will become alive with
life. It’s a complete reversal of the situation!
And in fact, the description of where this river will flow is
interesting because it means that to get to the Dead Sea as described in the
passage, it would literally have a geographically impossible route, across parched
valleys, up and through mountain ranges (water doesn’t flow up hill!). But filled with God’s glory, it goes to
impossible places. I feel that for us it’s a word that we will go to impossible
places taking his life and abundance with us. Not only that but the waters it
flows into, the Dead Sea, cannot sustain any life at all as it has such a high
salt content, but this river not only changes the water to fresh, but brings
swarms of living creatures. Completely miraculous!
..oo0O0oo..
So
then, how is that going to happen for
us? What do we learn from this
passage? It’s significant that this water flows from the heart of the temple,
from the altar, where the glory of God resides and it is this water, this life bringing water that brings life to the
surrounding land. So, if we are to be
like this life bringing water, where do we need to reside? In a place of
worship – as I said, in God’s presence, for us as individuals but also for us corporately in our churches.
This
is a message of hope and renewal, just as it was then, it is now. But above all
it is a call to turn to God: for us to turn to him, to be filled by him and to
then be used by him, to share this glorious life giving water with all those
who need it. The church can be an agent of renewal,
a source of life, but to do that we, all of us, we need to turn again, to God…
Tweet
being in God's presenceEzekiel 47Old Testament Prophetsprophecythe body as a templeworship
0 Comments
By Jules