It’s funny how we remember things that happened to us. And funnier too, how others, who were in the same situation can remember things very differently to us. That, I guess, is a sign of how our brains work, in that we are each totally individual. We respond to the same stimuli, situations and words in very different ways. So we remember things differently. I was sharing with someone about a sermon that I had heard last week and told her what I thought the preacher had said, but another friend who was in the same talk, added to what I had said and covered things I had totally forgotten, even in just a few days. I suppose I just picked up on the things I needed to hear, or the bits that really spoke to me.
Recently I have been reading my old teenage diaries. This has been a useful exercise personally, looking back over my past. One of the most interesting things only occurs to me now as I have finished the process, which is that how I remember things isn’t always actually how they happened. The memories have, over time, been shaped, warped and twisted into things that reflect the way I felt about those situations as they were happening and in the aftermath. So what I ‘remember’ is actually the way I felt about that situation/problem/person etc, rather than how it actually happened. As I look back 20 years later I can see the other side of those situations, see the point of view of others involved and look on them with, I hope, more mature eyes.
There have been some very painful situations to go over, that at first read were very hard to think about, to take myself back to those days, and to realise that the wounds are still quite raw, it’s just that I have over the years, covered them over. And what has happened in removing that covering has been remarkably healing. I read all my diaries through in one go (over a few days) and then went back and marked bits that I felt I should reflect on. What I found in going back over them is that the second time it wasn’t so painful. And then in reflecting on those bits, that I can look at the situation and see it from another angle. In places where I was quite horribly hurt, angry and broken, I can now see where I contributed to those situations. Don’t get me wrong, I’m not sinking into a ‘it was all my fault’ kind of condemnation, just that I can see my part in it all. And I can understand in some places why people acted in the way they did. Often because they were just as broken as me.
I tried to describe this process to my husband which was very hard, but the best I came up with was this: That ‘I’ or ‘me’, who I am, is shaped by all the things that have ever happened to me, both bad and good, and all of those things are mixed up together in my mind. They are not at the forefront of my mind, I do not visit those things/places regularly but they are there in the background in a kind of blur of what makes up ‘me’. And what I have found in going back and reflecting on these things from my past is that the blur that makes up me, is becoming lighter (as in less heavy, not less dark, although that would work too…!) and what is left is the ‘me’ that I was made to be. The resentment, hurt, pain, anger and misunderstanding is leaving that blur. So what I am left with is the memories, and the situations but now with a clearer view, one that I have and will learn from.
I feel so glad that I have had this opportunity to reflect on these things, even though at times it was very hard and I often didn’t like the ‘me’ from my diaries, it has made, and is making a huge difference to the way I view both myself and the life that goes on around me. 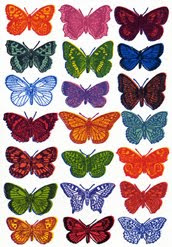 Emerging from the cocoon.