In celebration of a table 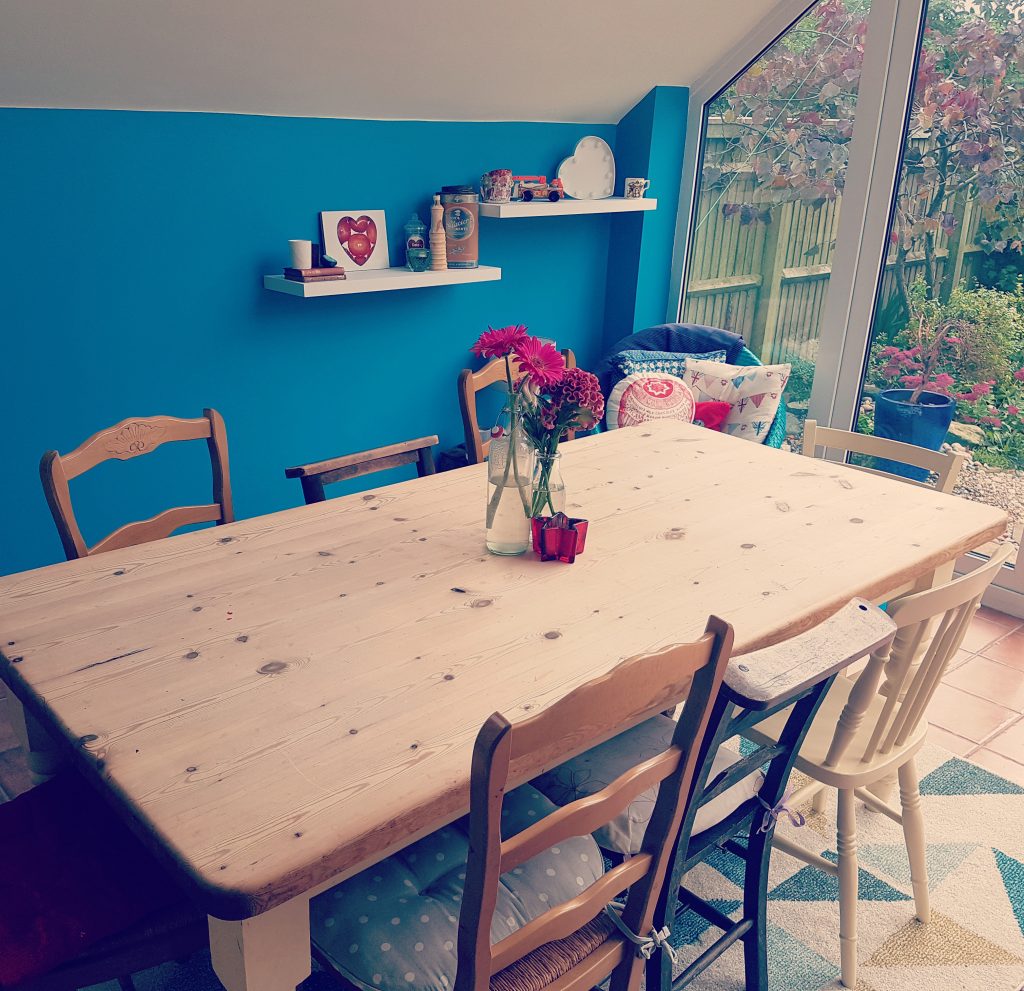 It’s funny really because it’s just a chunk of pine and a lick of paint (although, admittedly it is Farrow and Ball paint, darling…) but it has become so much more than that and God has used it in so many ways.

It all started when we had a kitchen extension on our last house, and once the build was done our old table was so tiny in the space I wanted to find something better. All the money had gone on the build (well that and some rather fancy curtains – but my goodness they were awesome curtains) and so I trawled ebay to seek a bargain-priced table. By some miracle I found this one.

When my husband arrived home having picked it up, he did not look happy. The table is 6’ x 3′ and even in our brand new kitchen it took up a huge space. Even I (who has every faith in my own design decisions) have to admit on first look, I seriously wondered if I’d made a big mistake.Thankfully it turns out I hadn’t (of course…). And I know now more than ever that this table has been a God given gift.

Lovingly I sanded it and painted it but also recognised that with 3 children it was likely to get knocked around a bit so I left the top as it was. (As an aside, growing up my parents had – well still have – a lovely pine table in their kitchen. At least once a year my Dad would sand the thing down and then varnish it to within an inch of its life. Which you’d think it might need being in a family home, except that the beautiful table was (and still is) continually covered with a PVC table cloth (the designs have varied over the last 35 years or so) and was never to be seen!)

Anyway ours is a family table, functional and used by all. You can see the drops of paint from kids paintings on it, you can see where I once put a hot pan down on it and the mark remains to this day, you can see where red food colouring was spilt over it in quantity (and I can’t even blame my kids for that one), where the table tennis bat has been thrown down on it in a fit of rage at a point lost (see the benefit of size is that it can double as a table tennis table – many a wet summer holiday day has been saved by that), and I’ve just noticed you can also a big blob of shoe polish on it, someone will answer for that one later!

Ok, now I know I’m rambling on about a table like some affectionate drunk (I’m not by the way) but this table has been a huge part of our lives. I love how it has become a place where people come together, they naturally congregate towards it. It has seen coffee mornings, art sales, mundane family meals – less than mundane family meals – essays written, stories shared, new friendships formed, old friendships grow and flourish, a funeral planned, heated debates and loving words spoken, pastry rolled (it is the best table for pastry making), oh and a lot of prayer.

This table, if only it could talk, it has seen our lives from the inside out. When I was prophesied over, and someone shared that they felt I would go into ordained ministry, it was over this table. When I heard that a good friend has died so young, and I had to share that news with others, it was over this table. After back surgery the local Vicar gave me communion over this table and it was such a profound experience. As a family we have recommitted to each other, making ‘family charters’ together for the year ahead around this table. Oh and so so much more.

Not bad for one table eh?

So when we moved to our new house for my curacy I resigned myself, quite emotionally, to the fact that it would probably have to return to ebay and begin it’s life again. Perhaps it would bless another family the way it had ours, perhaps it would be upcycled in some uber trendy shabby chic boutique and sold for way more than I had paid for it… Imagine my surprise then, when we visited our curacy house for the first time to find a room in which it fitted perfectly. No, more than perfectly, it fitted even better than in our old house.

Here we’ve had meetings around it, prayed and worshipped around it, invited the church to coffee over it, shared stories and testimony over it, cried around it, hosted curry evenings around it, and I love that on many occasions we all end up working around it together as a family: school work, homework, work work, all of us together around it.

And so here it continues to do its thing. Who’d have thought that a table could be such a gift from God, but that is absolutely what it is.