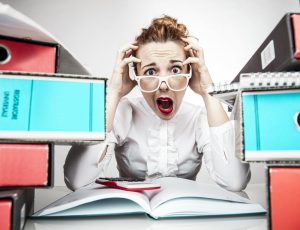 Me when trying to work out anything to do with figures…

So if you’re about to be ordained or were earlier this year, you need to know that you must submit a tax return. Perhaps I was asleep at that point at Vicar School but I don’t remember anyone telling me this. It was only having heard other people talk about tax breaks and the like that I realised. Now of course you should receive a letter from HMRC telling you about this anyway just in case you do sleep through that gem of information, but mine went amiss, or perhaps was filed in amongst the shed load of post-ordination paper work, who knows. Anyway it was finally in the Autumn this year I got around to sorting it out, and by then I’d missed the online filing deadline. We turned to a clergy tax company who sorted it all out for us and I am so glad I did, even with a simple return it’s rather complicated! I’ve learned a few things along the way that I wish I’d known at the start so here’s a few tips gathered from my own experience and that of other clergy.

1) If you’re not experienced in tax returns, most people advise using a clergy specialist agent at least for the first year. My return is very simple but even just taking into account that we own our own house which we don’t live in, and all that had to be declared, and all the costs that go with it, made it more complicated than I thought. I used Tax Management for Clergy (TMC) and it cost me £114 and my husband’s return using the same info will be £40 (Others suggested Mintaplan or Taxcalc). Well worth the cost, spending over an hour on the phone and masses of emails confirming information and what I needed to include and could exclude. Next year will be much easier!

NB: If you are going to file your own return online you do need specialist tax software, which is – as is a clergy accountant – offsetable against tax.

2) HLC – Heating/Lighting/Cleaning grant – not technically tax but needs to be declared if you get it. I understand it’s only given to stipendiary clergy in clergy accommodation, and it means you don’t pay tax on what you pay for HLC (so you get back about 16% which comes in your pay packet each month). In the first year of Curacy you guesstimate it – it’s one of the gazillion forms you get sent to fill in at the start. Try not to miss this, it is easy in amongst all the paperwork but does give you more money in the long run. After the first year, you need to put in actual costs rather than an estimate. I had no idea where to start with this – I mean how do you work out how much electricity goes on lighting? Well here’s the thing, you don’t. I gave TMC the figures for all our costs and they worked out the percentage which went on the tax return, but also I could then submit that to CofE (albeit I was late so 2 months of less in my pay packet until they catch up – tip: don’t be late!). And make sure you register with MyView as you need to add the figures online but this is also where you can find all your pay info etc.

3) On not being a spy. When I first called HMRC about my tax number they told me my files were ‘access denied’ and so they couldn’t look at them, nor could they tell me anything about why this was the case. I had to go via a special department and wait for them to call me back – all very mysterious except that I now know it’s called Public Department 1 – not very mysterious sounding after all. At the time it was rather frustrating, and at first I was told they put special agents in that category – cue comedy gags. Anyway it turns out basically all clergy get put in that dept so nothing to worry about but you need to call a different number if you are calling HMRC (03000 534720) and that makes it all a whole lot easier.

4) Tax Credits. If you get them, make sure they are totted up correctly and most efficiently. A few things on this:

5) Here follows a list of things I didn’t know you could include against tax, so do keep a record/keep receipts from the start (I didn’t…). All of these are claimable so long as the costs are not covered elsewhere, e.g. by the parish/first post grant etc

6) So all that boils down to, keep all your receipts through the year as you never know what you might be able to include, tax is rarely black and white and even less so if you’re clergy. As was pointed out in a Twitter conversation on this: ‘Honesty is important, but if something is genuinely work, by all means claim for it’.

Parishes work in different ways but here we claim expenses monthly and so a good idea is to keep an excel sheet on the go (or use something like expensify) and at the same time as doing the monthly parish stuff, add in anything wider to the main sheet. If you want to be really organised put it into categories as you go.

I hope this is a useful list, feel free to ask questions but I’ve got to be honest I’m not all that great with this stuff, hence why I use TMC!

And finally, big thanks to other clergy who have contributed to this list, there have been a few but particularly to Tiffer Robinson.

Preach // 10 Commandments // you shall not steal // are we stealing from God?