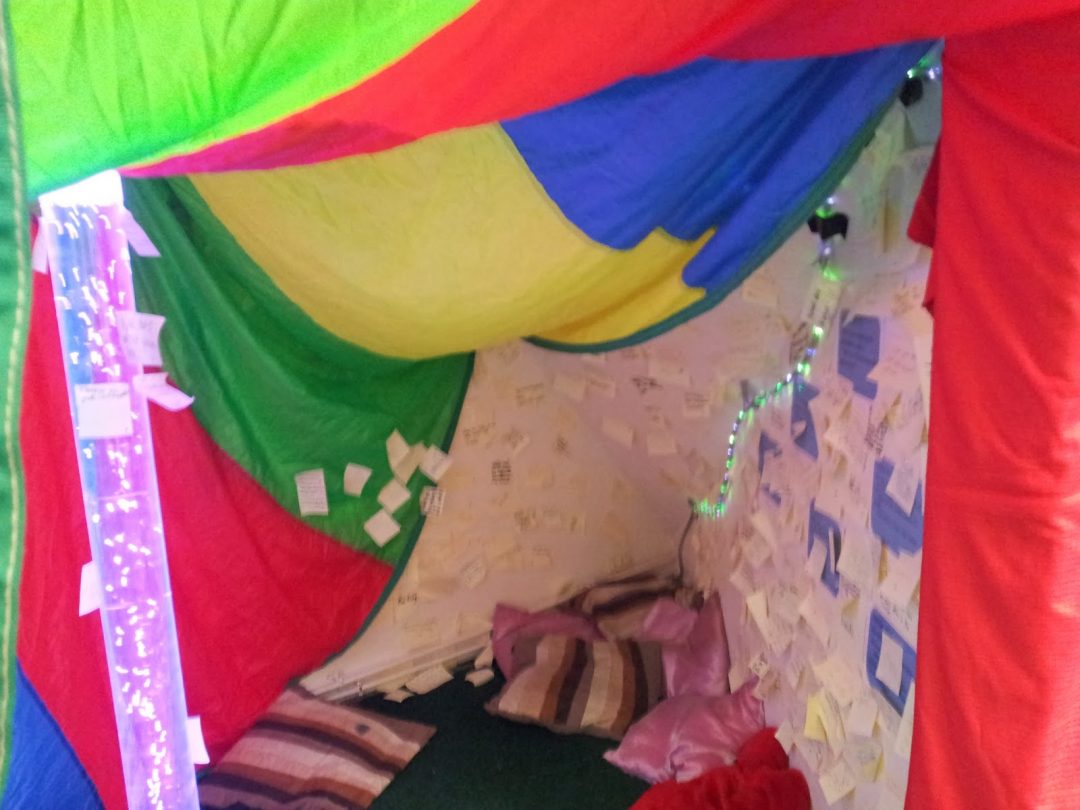 So if you’ve not yet heard of it, Prayer Spaces in Schools is an initiative that grew out of the 24/7 prayer movement. It involves setting up a space in a school with various ‘prayer stations’ encouraging children to think about different aspects of prayer and God. It is brilliant on so many levels. As a Christian, I love that it encourages children to think about God – what he might look like, what he might be like, what they think about him. But I also love that for those who are not Christians or have never been to church or heard about Jesus, they get the opportunity to explore these ideas. So often we don’t allow ourselves, or our children, the space to think about some of these big questions of life. The  Prayer Spaces are always non judgemental, so the kids thoughts are never wrong, the idea is just to get them thinking and talking. For some it might mean a planting of a seed, or spark an interest but for many it is just time to think. Obviously those running the space are Christians and so care needs to be taken to explain anything we suggest as ‘our own beliefs’ rather than what is or isn’t right or wrong.

I also love that while for many kids school is busy and a constant round of lessons and learning, a prayer space can be a moment of calm in their busy days. It gives them time to stop and think. It gives them the freedom to explore ideas, or if they want, to just sit and be.

I have helped on several of these now and it’s amazing how each one is so different. The sense of God’s presence differs from school to school, different questions are asked and children respond in different ways (as do the adults!)  In fact that is one of the most interesting things –  the differing responses to the space. There have been kids who don’t want to leave it, or want to come back another day. There have been requests for a permanent space like it. Some kids come in with one attitude and leave with another, some respond emotionally while others are quiet and pensive. It feels like God just meets with the kids wherever they are at, on so many different levels. And out of the spaces I have helped in I have never seen a child taking the micky out of another for their response, or picking them up on something they have said, it’s like they recognise there is something special about the space or something holy and they have respect for each other accordingly.

Another interesting thing is that rarely is there a complaint or concern. In fact often it’s the opposite, someone might be concerned but once they see the space and see what it’s all about they seem to be calmed. It’s amazing how the kids go back to their classrooms and talk about how great their time in the space has been and the teachers can’t help but be interested. In one school I helped out at, even the hardiest of atheists admitted that the kids had been beneficially impacted by their time in the space!

The Prayer Spaces in Schools website has some great resources and ideas so it’s really easy to get started. On top of that the ideas are linked to the national curriculum so for RE teachers it is literally a God send! If you have never tried it, do give it a go, or suggest it for your child’s school. It’s actually pretty easy to set up, you just need a few willing volunteers and a space to use!