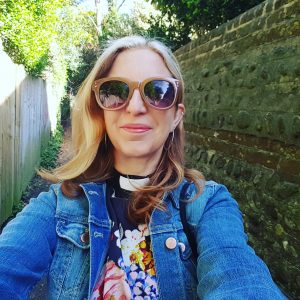 So continuing in looking at the dilemma of how to wear your dog collar, as a woman, this post is going to look at being you. And I guess the first thing to say is that (as was pointed out to me on Twitter) it isn’t a dilemma for everyone, some people just fall naturally into wearing it and find their own style straight away – which is great, I am so happy for you! But I know lots don’t, hence the posts…

One of the biggest challenges when first putting on a collar, is how to be you whilst still inhabiting and embracing the role. Or as Ally put it: “Balance of individuality and ‘house style’ – how much can our clothing express who we feel we really are?”

Such a good question, and as noted in the previous post, when my first delivery of clerical wear arrived in the post, I put it on and immediately felt sick. I think there is something about the expectation, having prepared through any selection you have been through and then training, usually for years, to the realisation you are at the finishing post and it’s all suddenly rather real. But then there is also the weight of responsibility that the office carries, which is, let’s face it, symbolised in that little piece of white at your neck.

So with all that whirring in your mind you also need to work on what on earth to wear. And I think there is something in that, that we shouldn’t ignore or gloss over. I had said I was just going to wear ‘normal’ clothes with the collar, and largely I do, but I have still wrestled with the balance between what the collar represents and ‘being me’. After all we are representing God and the church in our communities, whether we agree with that theologically or not, that is what people see when we are wearing it.

Of course there is one view that wearing the collar is like a uniform that we should disappear behind, which is much easier when wearing vestments of course, but day to day harder to achieve. You could simply go for wearing black – maybe trousers and shirts as many male clerics do too, or tailored black dresses. I imagine this makes life a lot more simple, and perhaps marks out the ‘uniform’ element in a more obvious way. And anyway black is suppose to be more flattering 😉

But then does choosing a uniform style take away from our own personaity? Some people would feel very restrained by that, hence the wrestle with what to wear. As wendy notes:

It’s been and continues to be a debate within myself as to how I should dress, and I do respect those who feel we should disappear behind the ‘uniform’, but it doesn’t work for me and I keep coming back (through prayer and thought and the opinion of others) to the fact that I was called by God to be the unique person God made me, not to conform to what I think others require of me, or to be like anyone else – God called me to be a non-conformist (Methodist) after all!

I personally don’t wear my collar every day and having always been interested in clothes and what I wear, I wasn’t going to go down the route of clerical shirts. I wanted to still be me, whilst inhabiting the role. And I, just 4 months in, am still experimenting with it all, as I know many others are too. Several people have mentioned it took them a year, if not years, to work out what their ‘Vicar style’ was. Sandra Sykes from ‘Collared’ notes:

I’d say from my experience what clergy want differs and is individual. You have to find what works for you. Be brave and experiment – but look for what you will feel comfortable wearing and which is still YOU while recognisable as clergy…

Depending on where and when you wear your collar, it’s worth thinking about what you team it with. For example I try not to wear jeans when in collar at church – we are a pretty informal setting but for me it seems one step too far. Equally, is your church the kind of place that expects a male leader to be in a suit – if so, what does this mean for you? It’s worth looking into this before you start Curacy or at a new church to save spending money on things you won’t need.

There came a point when I became even more aware of the need to look ‘professional’. As a naturally casual dresser (jeans and… um, jeans, mostly) if you go with what’s ‘you’ and what you feel comfortable in, you can end up giving off the message that you’re not very competent/serious/worthy of respect/authority… all of which may be true…! In a more senior incumbency with high achieving professionals it was more important to dress to the role in order to be taken seriously in the role.

This is a really good point (she types, having just been out in a rather short cut off denim skirt with the collar..) people often say to me ‘you are rocking that collar’ or ‘aren’t you a trendy vicar’ which is nice (if not slightly condescending perhaps) but then as Susie notes, am I doing myself a disservice? The jury is out on that one, but I leave it for you to ponder for yourself. However I did once hear of a Vicar turning up to do a funeral on his Harley wearing incredibly short denim cut offs. That is of course the beauty of a cassock, no one knows what’s under it and there are many clergy who have been known to do the 8am in PJs, and I know half the chaps at our ordinations were wearing shorts as it was so hot. Which is fine if you are robing, but just bear in mind though whether you might be seen in advance as this Biker was – by the family of the deceased…

One thing I would note is that I think female clergy are still a bit of a novelty in many places, there is still more pressure put on us that male counterparts, and in some cases more is expected of us. Not everywhere, but in some places, and certainly from some members of the public. Rev Kate Bottley posted on Facebook last week she had received a ‘gem of a letter’ noting:

You aware that the dog collar is an item Anglican clergy never have to wear?…’Why not opt for something soft and feminine?… Why not stop telling women what they should wear? And quoting this bible passage: ‘I also want the women to dress modestly, with decency and propriety, adorning themselves, not with elaborate hairstyles or gold or pearls or expensive clothes, but with good deeds, appropriate for women who profess to worship God.

There will always be people like that, everyone has an opinion, perhaps more so when you are in a visible role like clergy and to some extent we just have to ignore that and find what is right for us. People’s comments are not always derogatory or rude like this one, or even ignorant but often more about lack of experience. All of which does not help if you are trying to work out your own new style in a very visible way. I think the more you can experiment by yourself, or behind closed doors so you know what you feel confident in, will really help. If we go out feeling confident in what we are wearing, we will be more confident in our actions, whether that’s in jeans or a suit, we all differ.

Hoping this is useful for some people and the next post will look at suppliers, so if you’ve got one you want to recommend let me know!

Colouring Sheet / For the Glory of God