1 I have been a vegetarian since the age of 13

2 My favourite colour is blue

3 I can play the saxophone

Well the truth is actually all of them and none of them are true! I haven’t eaten meat since 13 but I have eaten fish so not technically a veggie

Blue is mostly my favourite colour but it depends on what for – actually I quite like black for clothes, or pink for stationery…

And I did once learn to play the saxophone many moons ago so I could probably still get out a note or two but does that really mean I can play it?

Bit of a trick question but all of those things I could say are true and yet they might also not be 100% true.

So, what is truth?

In our Good Friday passion reading we heard Pilate ask of Jesus ‘what is truth?’.

It’s a question that philosophers have argued/ debated over for centuries. Truth is a concept if you like, that it seems some of us define in our own ways.

In recent years we have seen the rise of ‘fake news’ or ‘my truth’, gaslighting, and other terms that essentially describe a manipulation of the truth.

As Christians we believe that The Resurrection reveals truth

And yet it’s also the ultimate contradiction.

How can death be followed by life?

Just imagine if the crucifixion and resurrection happened today. How would they be reported? Would Jesus’ death be referred to as fake news?

Would images of him on the cross be thought of as clever Photoshopping?

Would anyone actually believe that he died and then rose again?

The bible tells us that is exactly what Jesus did.

He died, on a cross, in overwhelming pain, indignity, humiliation and rose to life again.

And the truth is.

That he didn’t die because of a Roman punishment

Or because he was beaten. Because of the hatred of many.

No he died because of love.

He took the punishment of a dictatorial regime, of hate, of pain, of brutality, an instrument of evil, and he quenched it with love.

And then he rose to life again – came back to life, appearing among the people and in doing so he made a way for us too, to overcome death. Giving us an invite to be welcomed into his glorious eternal kingdom.

It is the revelation of ultimate truth,

revealing the one true God, in fullness, as fully human, fully divine.

that in Jesus Darkness becomes light

that in Jesus despair becomes hope.

>>>Without the resurrection Jesus was simply a freedom fighter who died for his cause;

But with it, he’s the bringer of eternal freedom and hope for every one of us.<<<

We get the promise of a place in God’s eternal kingdom through the resurrection.

That is why we celebrate Easter, why the resurrection is vital to our faith!

And there’s even more!

Even more than that, the resurrection is not just as a one off truth from history,

We don’t have to wait for eternity to experience the truth of it.

>>>The resurrection is an every day revelation<<<

An event that changed the course of human history, that means millions of people across the world today call Jesus their Lord and Saviour, and millions before us.

A saviour who brings people hope in dark times, who transforms people’s lives and brings life out of death – NOW!

>>>If truth is about the existence of reality, then our reality is defined in Jesus<<<

The death and resurrection of Jesus brings sense to our crazy fake-truth world.

Jesus’ resurrection is the beginning of God’s new project not to snatch people away from earth to heaven, but to colonize earth with the life of heaven….

I love that line – to colonoize earth with the life of heaven.

So the question today is how do we respond to that truth? Are we part of the colonization of earth with the life of heaven?

Well we all repsond to the truth in different ways. We see that in the bible, we see how different people respond to who Jesus is.

In our passages this week we have particularly seen the disciples behave in different ways – Judas, well, Judas betrayed Jesus in the worst way. Peter denied him 3 times, despite being warned he would do so, and the disciples scatted when Jesus was arrested. The Pharisees and chief priests denied the truth of who Jesus is entirely.

And in our John passage today we saw Mary, and Peter and John responding in different ways.

Mary Magdalene, came to the very tomb where he was laid, while it was still dark.

We might ask why she came now but the other gospel accounts all note that Mary and other women came to anoint the body of Jesus. And the text here even says ‘we don’t know…’

As Jesus was buried hurriedly before the Sabbath began it is likely the full burial ritual, anointing of the body etc was not complete and so they were returning to do so now the Sabbath was over.

And they find the stone rolled away from the tomb and Jesus gone. The resurrection has happened but as yet they don’t know it.

the women come to perform a task, perhaps only Mary stays after they return – (Matthew’s version has the women all seeing Jesus)

And she stays, perhaps she doesn’t know what to do in her grief, perhaps she just wants to be near this place. And then, then she sees Jesus.

And her reaction is to cling to him.

We read that Jesus said to her, do not hold on to me…’ She must have, in that moment been so full of emotion in seeing him, that she just threw her arms around him. You’re here, Jesus is here! He’s alive!

Her reaction to the resurrection initially perhaps a response in grief, or in joy at seeing him. But Jesus tells her not to hold on to him – perhaps an indication that she needs to understand things are different now, her relationship with him will be different.

And then she is given this amazing mandate – the first person – to go and share this wonderful good news that Jesus is risen from the dead. And she does, she goes straight back to the other disciples saying ‘I have seen the Lord!’. Because of this mandate she becomes known as the Apostle to the apostles.

Her reaction to the resurrection is to follow Jesus instruction to her – tell people about me. Tell them what has happened.

Peter and John react in a different way in the immediate aftermath, they only come to the tomb because they hear the body has gone! And they run, in some kind of slightly strange race with one, John, overtaking Peter. Though John doesn’t go into the tomb but Peter doesn’t hold back, ever the enthusiastic Peter!

They see the evidence but have not yet seen Jesus and they head back to where they were staying, still not understanding from scripture as we read in v 9 – that Jesus has to rise from the dead.

But we know that ultimately they both go on to be devoted servants of Jesus, Peter the founder of the church that spans the globe. John, one of the few who was there at the crucifixion, reportedly looked after Mary the mother of Jesus, planted churches and possibly wrote some of the books of the NT (Much debate on this!).

God used this bunch of misfits and flawed people to spread the message of truth – of Christ’s resurrection and what it means for humanity, across the world.

So the question for us today is how do we respond to the truth? To the resurrection? What is God calling us to do in response? As individuals and together corporately as church. We are not just readers of a story but participants in it – as I said on Thursday, we are part of this narrative that was begun at creation, and we continue it, custodians of it, for those who come after us.

So, last weekend I encouraged you to engage fully in this week, the journey, to put yourselves in it. And I’ve had conversations with some of you and know that different things have stood out to you this week – for example, the reflective reading we did on Tuesday, stripping the altar on Thursday, the silence, singing a particular song for example.

You know the most special moment for me was our act of devotion at the cross on Good Friday. I wasn’t deliberately watching what everyone was doing, I was simply stood by the step in case anyone needed help coming down. But standing there I couldn’t help but see the ways we responded differently.

Some of us gave a gentle nod, many of us lit candles, others kissed the feet of Jesus, touched them, gazed upon him, others still knelt before him, offered a prayer, said ‘thank you’, others of us sat and reflected, or held a prayer cloth in our hands.

Male, female, young and old, children, babes in arms, those with mental health problems or additional needs, the healthy, the sick, the rich, the poor… –  we are just as much a bunch of misfits (and I say that in love!) as were Jesus’ original followers.

And yet in so much difference we were in that moment united in such a powerful way, I could feel and see the love, the faith, the thanksgiving, the absolute devotion to our Jesus, poured out in our individual ways. Just as those early followers, in their differences were united in their belief in the resurrection and the truth of who Jesus is.

So, if God could take a group or misfits like Jesus’ followers, and use them to spread this message of truth and resurrection around the world, in their difference, in their failings. What might God do with us? Who might God reach through us? Here on our doorstep, in Burgess Hill?

At the shop, at Burnside, at the Priory, in The Woolpack or The Cricketers, the chippy, in our schools, here at St Edward’s, wherever we go – perhaps we might see a resurrection of the truth here in our community? Through us?

And we all have to do to see that, is commit to being people of resurrection truth and live it out. Let’s commit to that together, wherever God takes us, Amen? 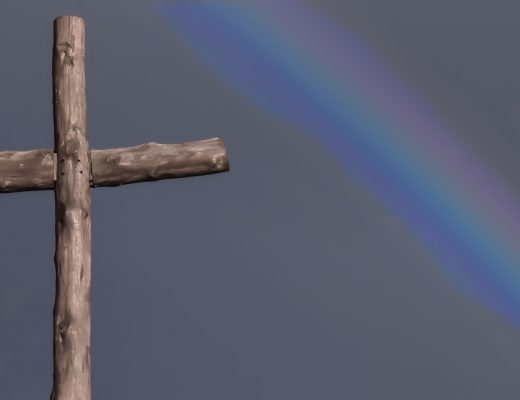