For the sake of anonymity, this post is being published some time after I wrote it.

I woke up this morning feeling crap. Got to be honest I have got a cold but this is more. I was grumpy, rude, annoyed with my kids, and tearful, very tearful. I was feeling let down, unsupported and alone. I planned to do nothing but lay on the sofa even though I have got a mountain of things to do, I just couldn’t face them. I’m also a bit angry with God and because I was feeling tearful I was on the verge of even forgoing my prayer time as I couldn’t face what I knew would just be a time of crying and so I just pushed God out of my mind.

Well, I say that, I tried to. Turns out it’s not actually that easy, and well, if God wants to speak then he will…

So, let’s back track a little:

Yesterday I spent a short amount of time with someone with severe depression. I was concerned for them, but probably in the end rather unhelpful. And if there is one thing I have learned from supporting people with depression, there really is nothing you can do except be there. But yesterday I felt desperate almost, and I went into ‘solve it’ mode. Possibly one of the worst things you can do. And as a result I have potentially alienated the person I sought to help (although I hope not).

I came away feeling completely useless. And sad. Well more than sad but I can’t describe it, it’s like the hope is being drained out of me, but with anger too, and frustration and disappointment and tears, so many tears. This is what it is like for so many supporting people with depression, just the utter sense of being unable to help,  and this was just my little glimpse of it.

I don’t use the word ‘hate’ very often but I HATE DEPRESSION. It is such a cruel illness, robbing people, real people, people with lives, with gifts and talents, with families, partners. It robs people of their lives, for some for a season, for others it’s recurring, like a cycle, things can be ok for a while and then the downwards spiral starts again. As an outsider you can see it happening, it’s so clear, you can try and put things in place to halt it’s ugly twisted path but often it’s relentless. It drains the life out of people. And it seems to strike wherever it will like some kind of random evil version of cupid, sending out arrows and firing without aim. Of course for some there are triggers, but what makes one person able to cope with something and others not?

I am a Christian but I also believe in science. I know that depression and mental illnesses are to do with chemical imbalances in the brain – it is an illness and it needs proper treatment. But I also completely believe that the devil has a hand in it too. It’s exactly what the bible says: ‘the thief comes only to steal, kill and destroy’ (John 10:10), that’s exactly the kind of thing he would do, drain the life out of people, leave them a shell, rob them of all joy. And that’s what I hate. I have seen people, such lovely wonderful people, with full lives and such amazing blessings, be completely drained of all joy and life.

So, this morning I woke up feeling like crap. Now I don’t in any way want to compare what I was feeling with those who suffer depression, mine is a temporary moment, so don’t hear me saying I know what it’s like, I don’t. But as I sat wallowing in self pity this morning (and really that is what it was) I just felt a moment of helpless uselessness. As I edged towards the sofa, calling me, inviting me, to a day of slovenliness I felt a gentle nudge from God. I was reminded of the pastoral theology classes we’ve been having at college, in which we learned some very basic counselling skills and looked at the how, the why, the what can happen etc. and I remember a conversation I had with a fellow student about how the tutors hadn’t talked much about the spiritual side of things. Some of the things that we experienced in those classes were painful and yet we were unprepared for what we would face in advance, both mentally and spiritually. We talked also about not taking on the feelings or the situation of the other person, and people gave examples of having had thoughts that were not their own but that echoed the person they were counselling, some time after they had gone.

And so, this morning it was a simple thing that drew me from my pit, I just read the words, ‘Christ IS risen’. And in that moment hope returned. I realised that perhaps I had taken on some of the feelings from the day before, some of the situation, that perhaps the thoughts in my head were, in some sense, not my own. Oh how quickly I had forgotten what I was taught, how unprepared I was, I had not prayed, did not pray.

If you are struggling to support someone with depression, this is a helpful video…

depressionmental healthPrayersupporting someone with depression
1 Comments
By Jules

a day of extremes 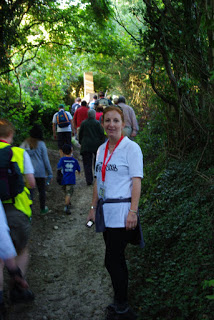