I’ve had a lovely few days enjoying the sunshine and the start of the Easter hols with my kids. And after ‘the disappointment’ from last week I’ve taken a few days off from anything theological, rather fed up of reading uninspiring books about becoming a Priest. Surely someone can write about the joys of Priesthood rather than the depressing reality of it all…
Anyway I digress. I have been meaning to read ‘The Shack’ again for a while, so in these few days I have been doing just that and really getting into it. It has been so nice to have one of those ‘can’t put the book down’ moments, rather than the slight drudgery of the other stuff I have been reading… Anyway The Shack is one of those books that divides people and invites debate, which is great. When I first read it I was completely overcome by the emotions it envokes, and this time I have found so much more in it, as I know what is going to happen, so I can see past the tragedy at what the writer is really trying to say. Lots of things ahve stood out to me but I was particularly struck by several references to freedom. As Christians we talk about freedom a lot. Having free will, the freedom to chose faith, the freedom of living in The Truth…  but what do we mean by all that talk about freedom? What does living in Gods freedom actually mean to us?
In the book the main chacter Mack is talking with Papa (God), who says this:

Does freedom mean that you are allowed to do whatever you want to do? Or we could talk about all the limiting influences in your life that actively work against your freedom. Your family genetic heritage, your specific DNA, your metabolic uniqueness, the quantum stuff that is going on at a subatomic level where only I am the always-present observer. Or the intrusion of your souls sickness that inhibits it and binds you, or the social influences around you, or the habits that have creayed synaptic bonds and pathways in your brain. And then theres the advertising, propaganda, and paradigms. Inside that confluence of multifaceted inhibitors… what is freedom really?

Indeed, with all that in mind what is freedom? Even in church freedom is only freedom to a point. Yes the truth sets you free, but only if you adhere to these guidelines, or pray in this way, or  sign up to what we believe.  Propaganda and advertising and social ihnfluences are just as apparent in church as they are elsewhere, perhaps more so, peer pressure is often greater, or even the feeling of guilt. How is that living in freedom? The conversation in the book goes in to say:

freedom is a process that happens inside a relationship with him…
yes, with Him, with Jesus, not with your church…

I think real freedom comes when we really recognise the love of God. And that is not easy, even when you believe, to really know Gods love, in fact for some it is a massive stumbling block.
But in that knowledge of love, can we really be free, free from our fears, from our past, from what others will think of us… and that is true freedom. But how many of us actually live in that freedom? I am sure I don’t. I want to and I desire to, but I’m not there yet.

And that, just aiming to get there, that journey, is really hard but necessary. Later in the book Jesus is talking to Mack, who has said that if God had stepped into his life in places in the past it might have saved him and his loved ones pain, but Jesus says:

To force my will on you… is exactly what love does not do. Genuine relationships are marked by submission even when your choices are not helpful or healthy… submission is not about authority and it is not obedience; it is all about relationships of love and respect.

hmmm. submission is one of those words that makes our hackles rise, especially us girls! But I love that line, submission is not about authority and obedience, but more about love and respect. It’s actually quite easy to submit to someone that you love and respect, without being subservient, but all too often we ignore the love and repect bit and go straight into thinking we have to be obedient. I think sometimes we all need to remember that. 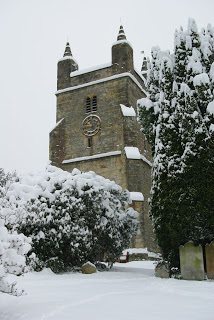 Why I love the good old C of E