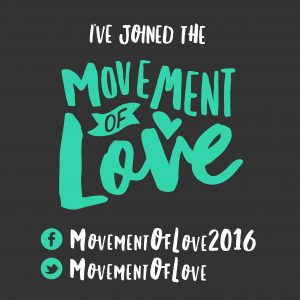 In the last 12 hours I’ve gone through a range of emotions. Shock, horror, joy, deep sadness, frustration and anger, and now simply a passion to stir up love.

In those last 12 hours (I was up late…) I have read countless reactionary tweets, comment pieces, Facebook statuses and more, declaring the need to love not hate. Largely I think, because of what Brendan Cox wrote about his wife in his beautiful statement about her death. This is part of it:

‘I and Jo’s friends and family are going to work every moment of our lives to love and nurture our kids and to fight against the hate that killed Jo.’

‘She would have wanted two things above all else to happen now, one that our precious children are bathed in love and two, that we all unite to fight against the hatred that killed her.

Hate doesn’t have a creed, race or religion, it is poisonous’

I can’t read that statement without shedding a tear:

For Jo, though I never knew her.

For the strength of her husband in that statement,

And of course tears of anger for what prompted it.

For the world – where in a week at least 100 people were killed or injured in Orlando, and the EU referendum campaign continues to spew vitriol and incite fear and hate (on both sides), refugees fleeing war and terror have died in their hundreds, and those are just the ones I have seen reported.

I find myself so deeply sad at the state of not just our nation, but our world.

Last night as I sat reading those tweets and news reports I found myself agreeing with every word they were saying and furiously tapping into my ipad as I sat in an hour long traffic jam, unable to do little else. I sat and listened to the furious hooting and shouting of other car owners and chanelled the apparent anger into my own piece on hate and love.

And then I stopped.

Along with 80,000 others I had just spent several hours in the company of Coldplay whose entire set (and much of their career too) was founded on a message of love, of unity, of tolerance and acceptance. We had all sung along at the top of our voices, chanted the lyrics, worn their badges with the simple logo ‘love’, we had been united in dance and song, were gathered in cheering the rousing words of Chris Martin as he talked of love and unity, and even sending out heartfelt words to Jo Cox’s family. And then here we were less than an hour later, with that message of love forgotten, charged with anger and taking it out on each other.

I stopped, realising that the words I was typing were not filled with love at all, I was writing about it yes, but I was angry and frustrated too just like everyone else in that car park and online.

Two weeks ago I preached my last sermon in a church that has loved us and nurtured us. It was on 1 Corinthians 13, perhaps the most well known passage on love in the bible. Part of that chapter says this on love:

Love is patient, love is kind. It does not envy, it does not boast, it is not proud. It does not dishonor others, it is not self-seeking, it is not easily angered, it keeps no record of wrongs. Love does not delight in evil but rejoices with the truth. It always protects, always trusts, always hopes, always perseveres          (or above in the picture in The Message version)

It seems so simple right? And of course we might say love is never simple, because people are complicated. But actually I think what we need right now is a simple message. We can point fingers and blame and not take responsibility, but here is something we can do. We can each of us, try to be patient, and kind, be more humble, less selfish, more peaceful, not listing the wrongs of others and so on…

And in some sense I wonder if we actually are delighting in evil too. The terrible acts that have happened this week give us a very reason to. We jolly well should be angry, we are almost expected to comment or post or wrote or complain, or shout at the terrible evil that has occurred, shouldn’t we? I mean what else can we do?

In this age, the power of the individual and the power of social media, of how one person’s actions can grow and be shared and have a huge impact is at our finger tips. So if you are angry about the state of our nation, of our world, of the terrible acts of hate committed in it, here’s what you can do – you can choose to love and you can tell people about it. You can choose to be kinder, to be more patient, more peaceful, hold less grudges, not point out other people’s wrongs…

We can point fingers at leaders, at the media, the church, organisations and more, but are we really any different? If we want to see a society more filled with love, WE are the ones that need to bring it. As individuals we can be united in this, we can make a difference. I’ve said several times recently, we need a #MovementOfLove – well I feel that more that ever today. Come on, let’s DO SOMETHING about it, stop complaining and commenting and pointing fingers, and get loving wherever you are. Let’s truly be a Movement Of Love…