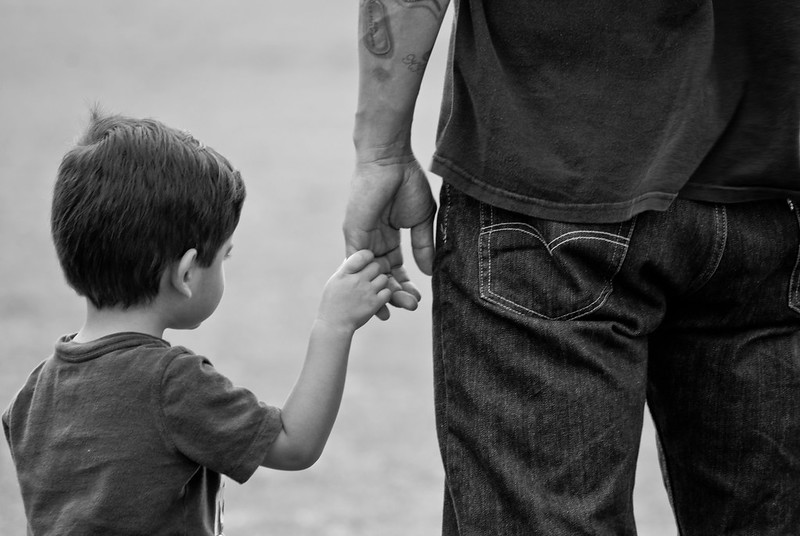 Today is Father’s day – a day when we remember Dad’s, but also those who father us. Many of us have wonderful Dads but others of us don’t, or perhaps thinking about being a Father or a parent is hard for us, for many reasons.

Well, today I want us to think about God as our Father – one person of the Trinity we were thinking about last Sunday.

What does it mean to have God as a parent? A parent who can be trusted and believed and is safe and good and who loves us abundantly?

In our Galatians passage we heard Paul saying that through faith we are Children of God. It’s a theme he comes back to in several places.

Just as God chose us in Christ before the foundation of the world to be holy and blameless before him in love. He destined us for adoption as his children through Jesus Christ, according to the good pleasure of his will.

So, God chose humanity – us – to be God’s children, before the world was even created!

And when Paul wrote this it was a really fitting picture for the time – in the ancient Greco-Roman world adoption was practiced widely – but not as it is today – this was adoption of men in their late teens/ early 20s to be a male heir where there was none. Without a male heir titles and wealth could be lost so it was common to adopt one in to keep the line going.

But what this meant was the son became heir to all that their adoptive Father owned, it gave them an in road into an abundant life – not just the status and the wealth but relationships with key people, influence where they had none previously.

The Father gained a son and heir, and the son gained a transformed life.

Paul has this in mind – knowing that we too – as we become children of God – by faith –have our lives transformed in abundance, now, and in eternity.

Paul says in Gal 3: 28 that as children of God that is what defines us – not our race or gender, or status (the things that divided people in ancient Rome/Greece), or anything else –

There is neither Jew nor Gentile, neither slave nor free, nor is there male and female, for you are all one in Christ Jesus

So we, in faith, whoever we are, get to be called children of God. And more than this, Paul goes on:

If you belong to Christ, then you are Abraham’s seed, and heirs according to the promise.

He’s referring to Abraham in the OT – what do we know about Abraham’s offspring?

We can read in Genesis 12 God promises Abraham offspring – Abraham who at this stage has no children and his wife is apparently unable to conceive (though as an aside I find it interesting that in the bible it’s always the woman who is barren not the man – patriarchy?)

Anyway, point being God gives Abraham and Sarah children who according to the promise we read in Gen 22:17, will be numerous – as numerous as the stars of heaven and as the sand that is on the seashore. I mean that’s pretty unfathomable figures – infinite. And God says these offspring will be a great nation, abundantly blessed.

So using Abraham as an example Paul is putting this truth of being children of God into the context of the day – into Jewish history. He’s saying that those who have faith and believe in Christ are as Abraham’s offspring. Under the same promise of God.

So for us too, as children of God we too get to inherit the kingdom of God the Father and we are abundantly blessed.

So what does the bible tell us about this Father who adopts us into his family? Well there are many attributes of God as Father but even just in today’s passages we see a few:

In our OT passage, we see Father God as compassionate but also as provider.

Elijah is fearful for his life.  He’s had enough and he says to God, I’ve had enough. I want to die. And God sends an angel to tend to him, and provides food and drink and Elijah has a nap. I think that is one of the most relatable things in the bible – I’m sure we’ve all had those times when you’re tired and hungry and let’s face it you can’t see things straight.

Have something to eat and a rest and all of a sudden things like so much better right!? Heard the term ‘hangry’ anyone?

God as a parent, all knowing, compassionate and wise – totally gets that Elijah is a little out of sorts, gets him a meal and puts him to bed. And of course when he wakes he’s refreshed and ready to go.

He’s also a Father God protecting his child – we read that Elijah’s life is in danger. He says to God:

The Israelites have rejected your covenant, torn down your altars, and put your prophets to death with the sword. I am the only one left, and now they are trying to kill me too.”

But God simply reveals himself to Elijah and then sends him back to a safe place.

In our NT passage we see Jesus freeing the man filled with demons. In compassion, in power. We see God as one who brings freedom. Giving freedom.

In Matthew 7 we read:

And here we see that, a man asking for his freedom, begging not to be tortured, and Jesus gives him what he needs – freedom. A life transformed. And more than that we might ask why Jesus sent him home rather than following him as so many did – Jesus says go home and tell people how much God has done for you (v.39)

So just in these passages alone we see some of the attributes of God as a parent. A loving parent, full of compassion, a protector, provider, full of wisdom and love.

And we get to be called children of that same heavenly Father if we want it. Isn’t that the best Father’s day gift?

Adopted into God's familyFather's DayGod as Father
0 Comments
By Jules